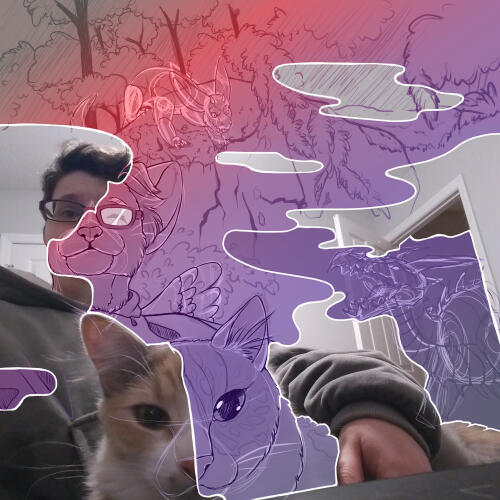 ][ Augusta, GA ][ Life Science Technician ][
][ Bachelor's Degree in Biology ][
][ Concentration in Environmental Remediation&Restoration ][
][ Creature Artist ][ s/he ][ 25 ][
"Weird creatures are my friends"
Feel free to contact me on any platform!

Can't quite decide on your branding? Maybe you need some help figuring out an emote or character design? Perhaps you're just getting started and are overwhelmed by all the potential choices but have no way of visualizing your options!
Let me help you! I love helping clients figure out all the little details for their projects, even when they come to me with no clue of what the final product might be.

Service includes:
- An initial consultation to assess what types of design services you need.
- A follow up consultation to go over certain details of the project.
- My own research skills and knowledge.
- For a small additional fee (see below) I will include explanatory drawings along the process. Normally, if I present you with a design choice you would have to make the decision on your own sight unseen, but if you purchase this add-on then I will draw you some small sketch examples.

Note:
Want another artist to illustrate your project for you? That's totally fine! Just let me know when we start and I will structure the consultation in a way that will make it easier to take the information to your preferred artist.

Emotes for Twitch or Discord: $30 per emote
Sub badges for Twitch: $25 per badge
Small Illustrations: Ask for a quote 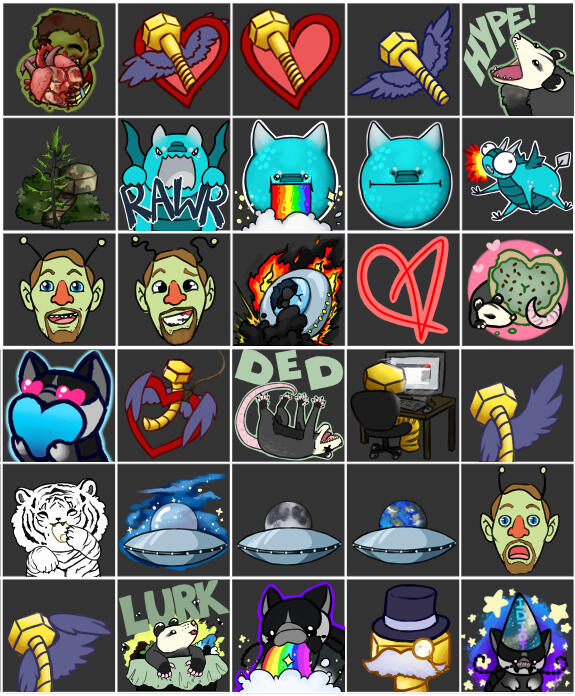 I greatly appreciate any and all reviews!
If you send me a 1-5 sentence message on your commission experience with me, I'll post it here! Thank you!

Design Consultation
None yet, why don't you leave one?

Emotes and Sub Badges
None yet, why don't you leave one?

Other Illustration
None yet, why don't you leave one?

Everything I've drawn or submitted for Project Open Squish

Cute little friends for you to take home!

They are very territorial, living in family units of 2-6. They only have their two front legs, though it is rumored they have vestigial hind legs. Think quadraped penguin without the feet.

They have all sorts of tail types and colors, even within the same family unit. Stahbebby and Bhuhbebby there are siblings! Their vision isn't exactly the best, so they primarily use their hearing and sensitive barbels to navigate their world.

I'll periodically post members of the Bebby family (all based on various things with "berry" in the name) and other premades. These are $15 USD a piece. DM to purchase!

If you want a custom you will get to choose the tail type and expression from the list, as well as what the design is based on. 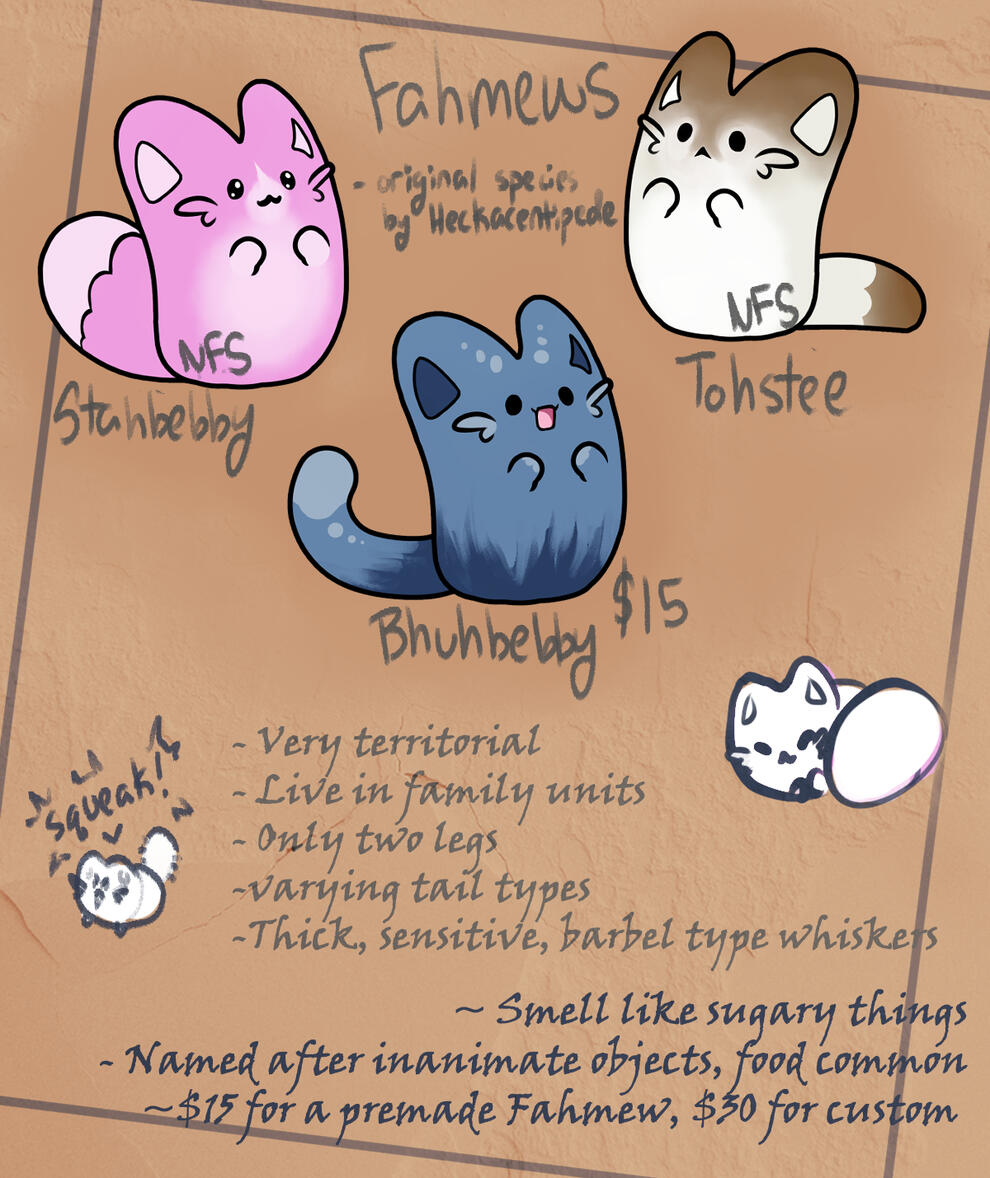 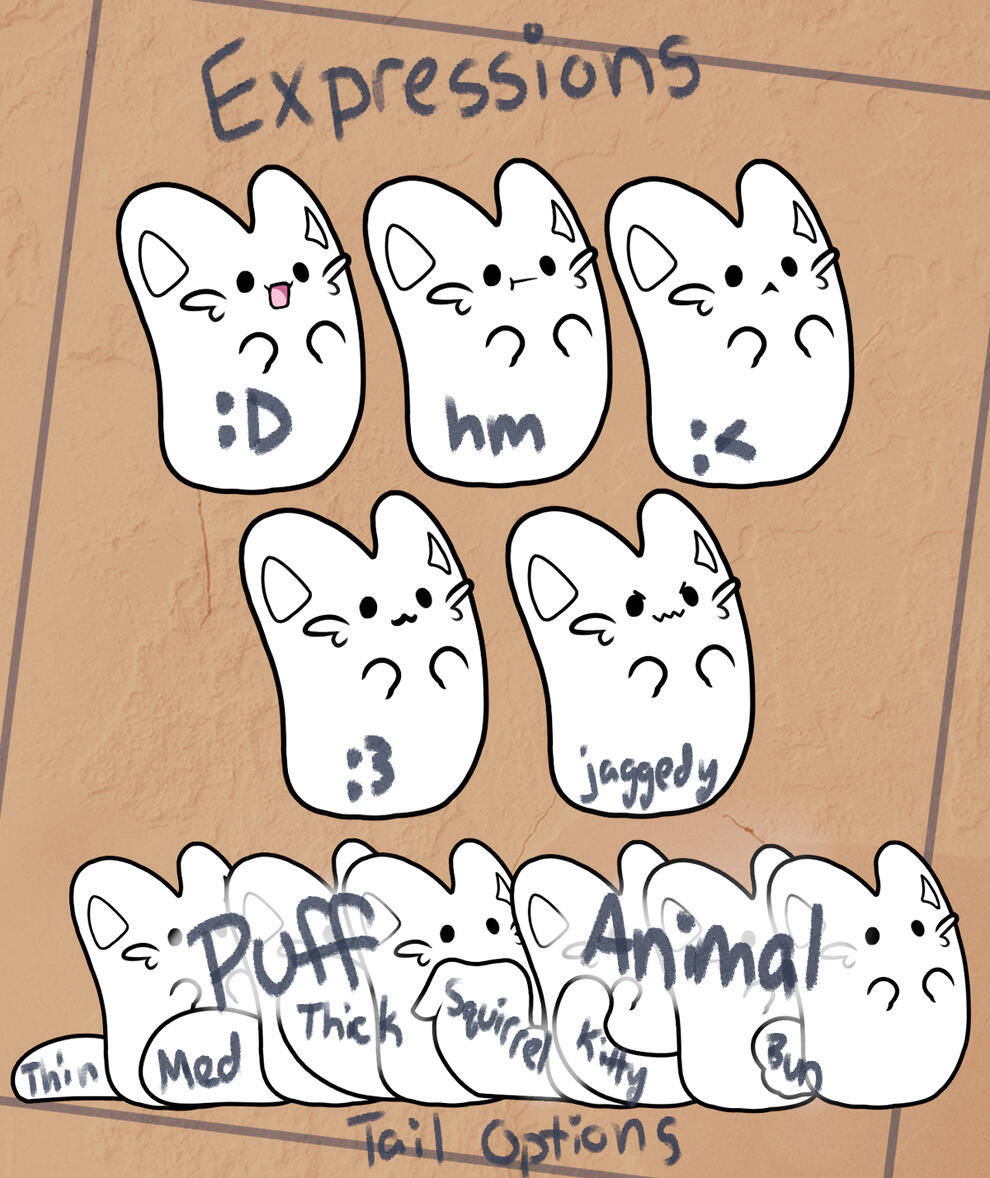 Podcasts that Hecka's Listened To

I listen to a lot of podcasts. These are grouped by genre kinda sorta.
I will typically only include things that I listen to regularly or had a positive experience with. Feel free to message/ping me on whatever platform to ask about more detailed opinions!
If there is a = next to the name, that means I would listen to this podcast again

Horror/Suspense/Drama
Alice Isn't Dead - 20 min eps - Protag drives a truck to find her lost lover, Alice
Blackwood - 25 min eps - 3 teens investigate local legend, things go deeper than expected.
Calling Darkness - Horror comedy. Funnier and gorier than you'd expect, but riveting. A group of acting students accidentally summons a demon and then does their best to escape and/or exorcise it. Shenanigans ensue!
=Down Below the Reservoir - 20 min eps - Weird town energy, thing WTNV but creepier
The Liberty Podcast - Idyllic world with violent outsiders...or is it?
Maeltopia - SUPER creepy world, somewhat of an anthology adapted for audio
=Mirrors - 3 women across time and space haunted by the same entit[y/ies]. Audio journal style
=Old Gods of Appalachia - Alternate history of the east coast. Dark things were sealed beneath the stone long before humans knew how to use tools. Why oh why did we uncover them?
Tanis - A weird place, or thing, that many people are searching for but few find. Incorporates real world conspiracies alongside the creepypasta-esque spooky stuff
The Black Tapes - A reporter discovers the world of paranormal research is a lot more interesting that she ever imagined, especially when she encounters Dr. Richard Strand
=The Blood Crow Stories - Each season is its own story in ~20 episodes. Think American Horror Story anthology series but RAUCOUSLY queer. S1 SS Utopia is about a psychology grad student listening to tapes from the mysteriously sunken SS Utopia to find way more than he bargained for.
=The Magnus Archives - In a normal world there are things that prey on the edges of our world. The Archives will take your statement on your encounters with these disturbing things.
=The Tower - There is legend of an old king who tried to build a tower to heaven. He ordered it be built, but after crew ascended the tower never to descend-well, construction was cancelled. A woman finds herself compelled to ascend. An audio drama experiment featuring a lot of ambient music tracks in between the voice acting. Melancholy at times, but very very good.
=The White Vault - A repair crew is sent to outpost Friestedt in the dead of winter to fix a broken transmitter. Things go horribly wrong.
Tunnels - Very similar to Tanis/The Black Tapes, investigating some spooky tunnels under the local town
Uncanny County - Southwestern paranormal anthology
=Welcome to Night Vale - Weird town with weird stuff, but the townsfolk don't see anything wrong with the way they live. Personal note: Early seasons are better than later seasons
WE'RE NOT MEANT TO KNOW - Horror anthology podcast
=Vast Horizons - A woman wakes up alone on board the Bifrost-a ship intended to bring humans to a new planet for colonization. Things get increasingly worse.

Comedy
=Everything is Alive - Interviews with inanimate objects
Hello From the Magic Tavern - Regular guy falls through a portal at Burger King leading to the magical land of Foon, updates the podcast via the weak wi-fi signal coming from the BK
=My Brother, My Brother, and Me - Advice show that only gives terrible advice. It's the McElroy brother podcast with all three of em
=Stellar Firma - Improv sci fi show. S1 starts with them designing planets. Horribly.
This Podcast Has Fleas - Kids podcast. A cat and a dog have competing podcasts in the same home. Shenanigans ensue.

Nonfiction/History+News
Cabinet of Curiosities - 15 min eps - Weird stuff that's happened in history
And That's Why We Drink - 1 hr eps - True Crime + Spooky Stories podcast with two friends
Go For Broke - Moments in history where people, well, went for broke. S1 is about the .com bubble burst, and future seasons will cover other economic bubble pops
=Land of the Giants - Each season covers how the various tech giants got big. So far, Netflix, Amazon, Google, and food delivery have been given a season.
No Such Thing As A Fish - Fact and trivia gathered by the staff of the British reality tv show QI
Post Reports - Daily news podcast from the Washington Post - covers 3 stories per episode
Reveal - I only listened to their American Rehab series but it's good reporting
=The Memory Palace - A podcast that tries to bring back the feeling of living in a particular moment in history, such as how it felt when the WWI draft was occurring
The Topical - Daily news podcast from the Onion [finished]
This Podcast Will Kill You - Podcast about diseases and poisons and the like
Today Explained - Daily news podcast from Vox. Tends to cover 1-2 stories per episode
=UnderUnderstood - The internet can't solve every question, but these reporters are going to try!
=Unobscured - Deep dive into specific moments of history. S1 was the Salem witch trials, S2 was about Spiritualism in the US, S3 was about Jack the Ripper
World Story of the Day - Daily news podcast from NPR. Tends to cover 1-2 stories per short episode

Nonfiction/Educational/Interview
=Adam Ruins Everything - 1 hr eps - Adam Conover talks to the pros that are on his show
Can I Pet Your Dog - 45 min eps - Podcast all about dogs
=Endless Thread - 40 min eps - Stories from and about Reddit
=Hormonal - Inclusive podcast about menstrual health and other womb-owner related topics
How to Do Everything - Think life hacks but with totally random topics each episode
Inclusion Inc: Diversity at Work - Interview series with industry professionals about how to make the workplace more inclusive of minorities and marginalized identities. Can be repetitive
=Nancy - Queer podcast, talks about all sorts of gay things
No Such Thing As A Fish - Unrelated to the book of the same title, a group of game show trivia finders share their favourite facts from the week. Often highly tangential
=Radiolab - Educational and science-ey, covers a whole bunch of different interesting topics
=TED Radio Hour - Deep dives into certain topics covered by TED Talks
Car Talk - Cars, car repairs, and relationship advice. Wacky car advice show.
Deeply Human - A show that describes itself as exploring the question of "why do we do the things we do". Fairly allonormative regarding sex and love, self aware of the cisheteronormativity. Covers many different topics from standing in line to dating.
How's Work with Esther Perel - Anonymized couples counseling sessions for work-based relationships. Covers a wide range of workplace dynamics, and work related topics.
=This Is Love - Stories about all the different ways that love can be expressed. Regularly makes me cry. S1 is about people, S2 is about time and space, S3 is about Italy, S4 is about animals, S5 is about making history, S6 is about queer folks
=Unexplainable - Life is full of mysteries that baffle scientists. Ball lightning, the mesopelagic zone, how smell works, and much more are beyond our current scientific understanding.
Where Should We Begin? with Esther Perel - Anonymized couples counseling sessions that cover a wide range of topics. Queer and polyamorous inclusive, Esther occasionally swears for emphasis, and often discusses NSFW topics such as intimacy and sex.

Podcasts I Haven't Listened to Yet
These are podcasts that have either been suggested to me or seem generally interesting
36 Questions || Among the Stars and Bones || Ars Paradoxica || Body Stuff with Dr. Jen Gunter || Boston Harbor Horror Presents || Brimstone Valley Mall || Country Queer || Cryptids || Darkest Night || Deeply Human || Dude, That's F****d Up || DUST || Every Little Thing || Hellfire Fables || How It Ends || Husk || I Know Dino || Lore || My Friend Chuck || Myths and Legends || Not Really || On Point || Oz-9 || Pseudopod || Sawbones || Scared to Death || Shadow Over Innsmouth ||Shadows at the Door || Stop Podcasting Yourself || The Alexandria Archives || The Allusionist || The Deca Tapes || The Hidden Frequencies || The Lovecraft Investigations || The Milkmen of St. Gaff's || The Night Post || The Penumbra Podcast || The Silt Verses [Ep3: animal death warning] || The Six Disappearances of Ella Mccray || The Storage Papers || The Unseen Hour || Wait Wait Don't Tell Me || Wooden Overcoats || Work Life with Adam Grant || Wrong Station